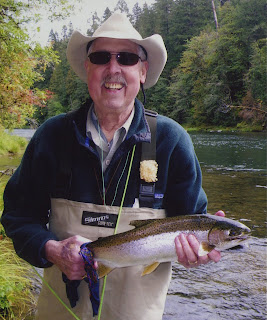 Dick and I first crossed paths in a conference room after a client asked Frey Design to team with Dick and his wife Marilyn, we would focus on design and they would do the writing and marketing plan. I think it was one of those situations when we both looked across the table at one another, smiled and thought, “Damn, I hope this goes well”!

Well, we hit it off, and soon Dick and I were teaming on other creative endeavors, meeting deadlines and celebrating with ice-cold beers while sharing stories beyond work. A friendship began.

As we shared about our love of the outdoors, it didn’t take long to discover which river most brought a smile to Dick’s face – the North Fork of the Umpqua. A river that is challenging and advanced for any fly fisherman seeking to land a steelhead.

In October, Dick and Marilyn made a special trip back to their favorite river. A welcome break from taxing hospital stays the previous two months. Dick was in the midst of a courageous fight with a rare rheumatoid disease. It made breathing difficult and oxygen support necessary.

There are days in life that become special. Not because we planned them to be but because for some reason greater than ourselves they somehow intersect the divine. This was one of those days. With arms full of gear, Marilyn muscled the tools of the trade while Dick steadied himself with his trekking poles for a careful descent to the river below.

Great marriages are great teams, and this team’s name is “Dick and Marilyn”, a team whose strengths and weaknesses are known and willingly supported to the others benefit. At river’s edge, Dick negotiated the shallow submerged rock shelf to the edge of deep water. He began to cast as so many times before. As part of the team, Marilyn was at his side, her hand securely holding the edge of his waders to aid his balance. Dick was again doing what he loved. It was his passion.

The excitement of the moment is captured in the photo above. This one was special.

With animation Dick recalled this fishing story as we met December 18th at our usual Friday spot for lunch with an end of the week cold beer (actually two). As he shared of that day, the focus of his gratefulness quickly shifted to Marilyn. He loved his wife dearly, and it was a privilege to just sit and listen as this man spoke so freely of his appreciation and devotion to the one he loved.

Unfortunately for all who knew Dick, he entered the hospital the next day and passed January 16, 2010. His memorial service was packed. Stories from friends continued as around a fire for hours. It was one of the most meaningful memorial services I have attended.

A life lived with passion. “Fish On” friend.
Posted by Blake Frey at 8:53 AM