Smoke in your eyes 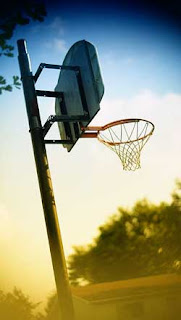 I have always loved basketball. My family grew up with woods behind the house and before we could afford a nice cement court with lights, dad leveled a large area of dirt, fell a tree nearby which became a sturdy post, built a strong wooden frame, attached the backboard and rim and then dropped the whole assembly into a deep hole with cement so the rim came miraculously close to 10 feet high.

My brothers and I were in heaven. With our red, white and blue basketball we hosted some great games with the likes of Russell and Havlicek; Goodrich, West and Chamberlain; Alcindor and Robertson; Reed and Frazier; and Unsel with Monroe. I was partial to being Havilcek or Monroe.

On that court we knew where all the roots and low spots were. Whether in the dust or mud we spent hours playing every game we could think of, often coming inside only when the mud on our hands was too thick or when mom yelled that it was time for dinner.

After I was first married, we lived in apartments that backed up to a big park. When getting home from work I would at times unwind by grabbing the basketball and walking across the park to a black top that had two small courts separated by a single high cement-block wall.

One evening I had a half hour to burn so threw on my old running shoes while leaving on my black socks, dress pants and shirt. I just wanted to shoot around a bit and didn’t expect to work up a sweat. After taking a few shots, a short guy appears from around the cement wall to my side, and upon taking an extended drag on his cigarette asks me if I would like to join him in a quick 2-on-2 game with some guys I couldn’t see. I loved playing 2-on-2.

My new smoker friend didn’t project athleticism as I followed him in his old blue jeans and worn tee shirt to the other court. Just as I got my first chance to assess our opponents, who are wearing the latest matching Nike gear with matching “sport” bags, my new acquaintance drops his cigarette to the ground, snuffing it dead with his left foot while yelling out, “want to play us in a game?” The two looked us up and down, smiled and said, “Sure”.

The sport bag duo started out at 70% effort, letting us take a few outside shots without too much resistance. After the first three went in they looked at each other and adjusted their jock straps. My friend “Nic”otine was launching long and finishing at the rim. Everything he and I did was golden. We had played before. That evening we completely smoked the young bucks and they were not happy. Their frustration turned to humility when three of their friends arrived, also in matching gear, and asked what the score was.

Nic and I didn’t say a word but just let their silence reveal what we didn’t have to.

Time to say good game and exit. Nic lit up and headed across the park. For me, it was time for dinner. For at least that moment, Nic and I were Havilcek and Monroe.

To this day, I never underestimate a person on any “court” with the cig or black socks.
Posted by Blake Frey at 9:45 AM